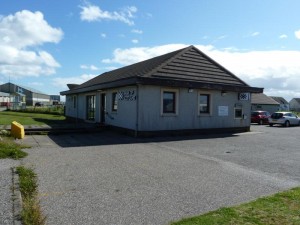 Bank of Scotland Bank in Balivanich

Balivanich is also known by its Gaelic name, Baile a’Mhanaich which means “town of the monks”. This goes back to the 6th century, when there was a monastery in Balivanich The ruins of Columba’s Church can be found just south of the village.

Balivanich is the main administrative centre on the island and here can be found a Post Office, hospital, primary school and several shops and cafes.

Benbecula in Gaelic is Beinn na Faoghla which means “mountain of the ford”. This is a very apt name for the island and its solitary hill, Rueval, which is a stepping stone between North and South Uist.

The islands are connected by a series of causeways, but once upon a time crossing to the Uists would mean fording the dangerous stretches of tidal sands.

In terms of population and commerce, it is probably second only to Stornoway, the capital of the Western Isles. Its size is due to the presence of the Army base which supports the MoD rocket range.